Associate Professor Nirmal Patel specialises in keyhole (Endoscopic Ear Surgery) management of cholesteatoma since 2012 when the first surgeries were performed in Australia.
Contact Our Team

Associate Professor Nirmal Patel specialises in keyhole (Endoscopic Ear Surgery) management of cholesteatoma since 2012 when the first surgeries were performed in Australia. He was the first Australian member of the International Working Group on Endoscopic Ear Surgery (IWGEES https://www.iwgees.org), the premier international group for keyhole surgery and is now the Australian Board member for the group. He was elected as general secretary for IWGEES in June of 2019.  Nirmal is also a founding member of Australia’s first Research Collaboration (Sydney Endoscopic Ear Surgery Research Group) which has run 8 courses to teach local and international surgeons key hole ear surgery. He has performed over 600 endoscopic (keyhole) ear operations.

In order to understand chronic ear infection, one must have some knowledge of the hearing mechanism.  Watch the video below on how hearing works. 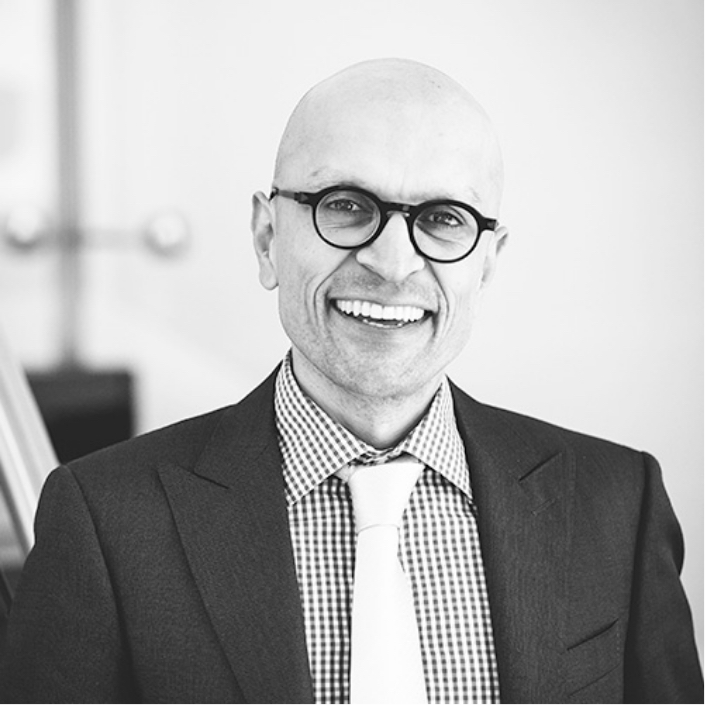 Cholesteatoma is a term used to describe a skin cyst (or growth) in the middle ear.  A patient can be born with skin in the middle ear, or they can get the condition usually after recurring ear infections.  The skin cyst, if left untreated, can grow and destroy local important structures such as the bones of hearing, inner ear, facial nerve (that makes you smile) and sometimes it can inflame the brain lining or the brain itself and cause serious illness.  The condition occurs in approximately 1 in 10,000 in adults and 1 in 30,000 in children.

The most common theory suggests that cholesteatoma occurs when the middle ear forms a negative pressure (often due to the shape of the eustachian tube and/or sinus problems).  The negative pressure collapses the ear drum into the middle ear.  The ear drum normally generates the skin that travels through the ear canal and contributes to wax formation.  When the ear drum is collapsed, the skin grows in the middle ear and secretes enzymes that dissolve bone.  The lesion is not a cancer but may act like a slow growing tumor as it destroys the bone.

What is the treatment for Cholesteatoma?

Cholesteatoma’s are usually treated surgically with a preference for the minimally invasive endoscopic approach if possible.

What are the symptoms of Cholesteatoma?

Most commonly symptoms of a Cholesteatoma are blocked ears with other symptoms including hearing loss, pain, discharge and bleeding.

How does Cholesteatoma present and how is it diagnosed?

Often a patient has a history of childhood ear infections. The chief complaint is usually recurring ear infections, a blocked ear or hearing loss. A hole in the ear drum in the roof of the ear (the attic) or the margin of the ear (marginal perforation) is characteristic of the disease. A CT Scan of the Temporal Bones (ears) often confirms the disease by showing a destruction of middle ear structures. A hearing test sometimes shows a hearing loss, which is usually conductive in nature.

Is a cholesteatoma painful?

Yes, a cholesteatoma can be painful if the lesion is infected or growing towards the lining of the brain or nerves. Frequently however there is little to no pain.

There are risks with any operation but generally the cholesteatoma surgery is considered low risk when performed by a trained otologist (ear surgeon).

If left unattended the cholesteatoma lesion can grow and damage critical structures such as the inner ear (hearing and balance), facial nerve (causing facial weakness) and the brain (causing meningitis or brain abscesses).

Is cholesteatoma a cancer?

The cholesteatoma lesion is not a cancer but behaves a little like one, in that it is locally destructive to critical structures such as the inner ear, facial nerve and brain.

Is cholesteatoma a rare disease?

How is Cholesteatoma treated? Is surgery required?

Surgery has been the recommended option for chronic ear disease for decades, since the use of the operating microscope became commonplace. It is necessary to eliminate the infected bone and skin cyst and therefore prevent serious complications.  Endoscopic (Keyhole) techniques are becoming more commonplace and can be used to treat even larger cholesteatoma.  Modern day cholesteatoma surgery is either performed as a day surgery or overnight stay in hospital.

Three broad techniques are used – Endoscopic (Key Hole), Canal Wall Up and Canal Wall Down Surgery.  One of these three techniques is used depending on the aggressiveness of the cholesteatoma.

Endoscopic (Keyhole)  is the least invasive (with no external cuts).  This is the preferred method and occurs in 60% of cases in my practice.

Canal Wall Up preserves the bony ear canal (but involves a cut behind the ear).  This is required when the cholesteatoma is larger and extending into the mastoid bone.  This is used 30% of the time in my practice.

Canal Wall Down removes the bony ear canal and most of the mastoid bone (in this technique there is a large cut behind  and in the ear canal; leaving the patient with a very large ear hole and a flattened ear).

This is the newest technique and depends upon specialised equipment, high definition cameras and low heat light sources.  This is Associate Professor Nirmal Patel's technique of choice since 2012 if the cholesteatoma is localised to the middle ear (including the roof of the middle ear ).  It has the advantage of requiring no cuts outside the ear canal and no hair shaving.  This newer option is usually a day surgery procedure.  The recovery is in general less painful and quicker than canal wall up or down techniques.  The patient usually returns to normal activities a lot quicker.  Quality of life improvements have been shown over the behind the ear methods.

If the cholesteatoma extends into the mastoid bone then this technique can be used.  Canal Wall Up surgery allows the patent to ultimately (in a few months) treat the affected ear relatively normally (i.e. allow water exposure and swim normally).

The disadvantage is sometimes this technique requires two operations; the first to remove the disease and the second to reconstruct the hearing.  To prevent the formation of scar tissue and help normalise middle ear function, a thin plastic sheet is often inserted behind the eardrum. If the chronic ear disease has progressed to fill the ear with scar tissue, or if the ear bones have been completely destroyed, surgeons will perform the operation in two stages.

At first, the plastic sheet will be inserted to allow normal healing without scar tissue formation. In the next operation, the plastic sheet is removed and prosthetic ear bones will be placed to attempt to restore hearing. It won’t be known until the time of your first surgery whether it will be necessary to separate the two stages of the operation.

These are used when the disease is severe and has already damaged the ear canal wall, inner ear, brain lining or facial nerve.  They are not the technique of choice in our clinic as the technique is more deforming causing a wider opening of the ear canal and more bone removal (which ultimately means the ear sits more recessed and flatter on the skull; the healing is also prolonged compared to canal wall up techniques.  Also in our hands, the Wall Down technique means a worse hearing outcome (compared to transcanal or canal wall up) with hearing bone reconstruction, as the middle ear space is usually shallower.  After canal wall down mastoidectomy it is usually necessary to have the cavity cleaned every 6 to 12 months, and some patients will need to permanently avoid getting water in their ear.

Prosthetic ear bones made of plastic can replace any diseased ear bones in the middle ear; alternatively cartilage may be used or the bone may be relocated. Tissue grafts made of a layer of muscle and a layer of cartilage are used to repair the perforation in the eardrum.

How long does it take to recover from Cholesteatoma surgery?

Recovery varies according to the approach for the cholesteatoma surgery and healing factors of the patient, but the following are good guidelines:

Is mastoidectomy a major surgery?

Generally mastoidectomy is considered a significant operation but can be performed as a day surgery procedure. Pain from the operation usually lasts 5-7 days. To watch a mastoidectomy click here.

Can I fly after cholesteatoma surgery?

Generally after the newly grafted ear drum has undergone early healing then flying is allowed, usually 3-4 weeks after the cholesteatoma surgery.

Can an ear drum regrow?

Usually, the eardrum is grafted with the patient’s own tissue (cartilage, perichondrium or fascia) and this heals to act like a new eardrum. 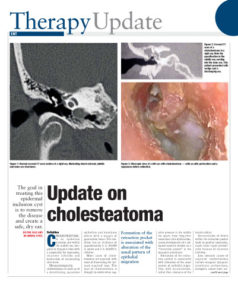 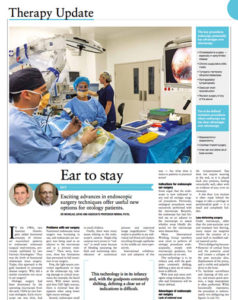 Still have a question?

Our team will be happy to answer any questions you may have about Cholesteatoma’s.